As an Arizona Bankruptcy Attorney, it really breaks my heart to see people come into my office wearing a scarlet letter that is both self imposed and imposed upon them by the judgments of their peers. Society tends to attach this scarlet letter to a bankruptcy filer that, more often than not in these financial times, need not be so attached. While society ought to realize that, often, circumstances beyond an individual’s direct control can lead that person down the road of bankruptcy, for the most part, even in 2011 it often does not. For some reason, even in present times with all the reports of job loss and the downturn in the economy, there is still something about bankruptcy that causes many to make snap judgments and to stay behind walls of ignorant bias.

There is no doubt that there is an argument that some people in the past have run up large credit card bills all the while just planning to do a Chapter 7 liquidation bankruptcy to wipe out all their unsuspecting creditors. Additionally, there is no doubt that this is not laudable behavior. However, the danger comes when members of society assume this is what ALL people who file bankruptcy do. This stigma often prevents good people who find themselves in circumstances which are beyond their control, circumstances where bankruptcy could definitely save their financial present and future, from seeking out bankruptcy at all, to their great personal and financial detriment. The truth is that any one of us could easily be one divorce, one illness, one job loss, or one judgment away from finding ourselves staring at a potential bankruptcy. That being the case, it is imperative that we let go of stereotypes a bit and embrace reality.

In order to get past the stigma and stereotypes associated with bankruptcy it can be useful to really break down the circumstances that might lead a smart, capable, and responsible individual to look to the Bankruptcy Court for relief from debt. I will even use an extreme example by selecting Sonja Morgan, New York socialite and member of the cast of Bravo TV’s Real Housewives of New York City to make my point. 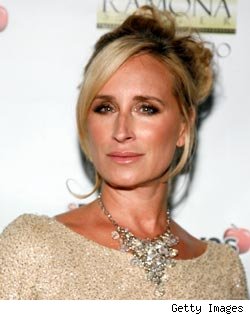 Ms. Morgan is a smart, attractive, New Yorker who by many accounts seemed to have it all and have it all together. These adjectives describing Ms. Morgan ought not to change simply because she elected to exercise her constitutionally protected right to bankruptcy protection. This is especially true when so many of the reasons that lead her to bankruptcy were very much beyond her direct control. Unfortunately the media and those in society are judging Morgan and looking down their noses at her causing her emotional distress.

At one point in time, Ms. Morgan was married to an heir of J.P. Morgan, a famous American financier, and probably thought she would be in love and financially secure for life. At some point, like more than 50% of Americans, Ms. Morgan’s marriage was not successful and she was forced to face life as a single woman with a daughter. To that end, Ms. Morgan explored some business ventures and hoped to make an investment in a movie she thought would launch a successful future. Ultimately, that movie investment failed and she was saddled with a, reported, $7 million judgment as a result (which was recently upheld by the United States Court of Appeals). The cumulative effect of a divorce and the failed investment lead Ms. Morgan to file for bankruptcy protection in November 2010, with her debts exceeding her assets.

You may not have much sympathy for Sonja Morgan at first blush, but what I am hoping to demonstrate is her humanity. Divorces happen to more than 50% of Americans. A divorce, a bad business decision, job loss, or illness can happen to any of us and these are the very things leading people to bankruptcy in these economic times. Hopefully Ms. Morgan remaining smart, capable, and together after her bankruptcy filing can be a relatable face for others who find themselves in similar circumstances. By filing for bankruptcy protection Ms. Morgan did what she needed to do to stop the bleeding, to protect her and her daughter’s home, and to give her the chance to reorganize and work with her creditors.