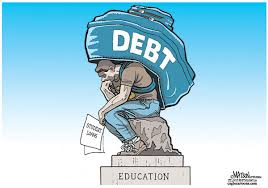 The original motivation for reigning in dischargeability of student loan debt centered around preserving government loans, with proponents of reform painting bleak scenarios about federal educational aid drying up if the discharge status quo carried the day. The first student loan reforms took place in 1976 as an amendment to the Higher Education Act and required that debtors wait five years from the beginning of their repayment period, or demonstrate undue hardship, before their student loans were eligible for discharge in bankruptcy. The five year bar was later extended to seven years and in 1998, the laws were changed so that governmental student loans could never be discharged absent a showing of undue hardship. In 2005, the Bankruptcy Abuse Prevention and Consumer Protection Act (BAPCPA) made all educational loans, public and private, nondischargeable absent a showing of undue hardship (an impossible standard to meet as interpreted by courts across the country).

With one-in-three students loans considered delinquent and often affecting a student’s ability to make purchases in the future, the bill could offer much-needed reprieve for college students left with mountains of both federal and private student loans. However, the likelihood of the bill moving forward this session is slim, the WSJ reports.