A bipartisan bill, expected to be signed by President Barack Obama, would lower the rate on federally subsidized Stafford loans from 6.8 percent to 3.9 percent. It comes a month after lawmakers failed to reach a deal to keep the interest rates from rising from 3.4 percent to 6.8 percent. This is good news for everyone with student loans. Total student loan debt in this country is now higher than total credit card debt. It is fast becoming the number one debt problem in America.

I am the State Chairperson for the National Association Consumer Bankruptcy Attorneys (NACBA). Our lobbying arm worked very hard to get this interest rate reduction. We are continuing to lobby for changes to the bankruptcy law regarding the discharge of student loans. Current bankruptcy law only allow the discharge of student loans if the debtor can prove a hardship. The rules for hardship are so strict that it is virtually impossible to obtain a hardship discharge unless you are totally disabled and have been making payments on the loans. 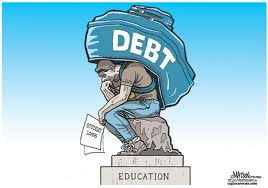