In February 2015, a healthy and able bodied debtor was able to discharge approximately $119,000.00 in student loans in Nebraska. The Court looked at the totality of the circumstances in the case and specifically at the fact that the only repayment option offered by the lenders was the suggestion that the debtor “find more money”. Typically,
discharging student loans in bankruptcy is next to impossible and normally requires the debtor to be in extremely poor health with no prospect to earn an income. The lenders were particularly outrageous in this case stating in its defense that the debtor could simply relocate and find a better paying job. The Court quickly dismissed the lenders argument and found that the debtor made a “good faith effort to maximize her income. 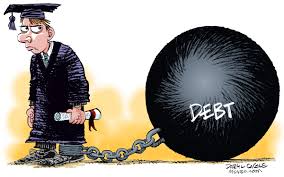 President Barack Obama recently signed a “student aid bill of rights” to make it easier for people with student loans to pay back their debt. This so-called bill of rights will require that businesses that service student loans provide clear information about how much a borrower owes, what options exist for repayment and if a borrower falls behind,
provide help to get back in good standing with reasonable fees on a reasonable timeline.
The lending industry has resisted loosening bankruptcy standards for student loans, but advocates have argued students burdened by heavy debt should be able to more easily use that as a way to discharge their obligations in bankruptcy.